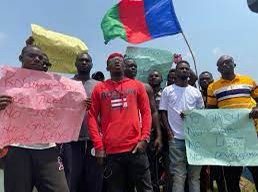 Indigenes of the coastal settlement of Koluama town, on the Atlantic fringe in Southern Ijaw Local Government Area of Bayelsa State have shut down an oil facility owned by Conoil. The shut down, it was learned, was backed by the members of the Koluama Oil and Gas Committee, insisting that the oil firm failed in the implementation of the Memorandum of Understanding, MoU which spelt out social obligations of the oil firm to its host communities.

The facility known as Ango 2 field, operated by Conoil since 2013, has a crude production capacity of over 30,000 barrels per day.

The angry folks, including women, youths, and elders, reportedly stormed the facility on Wednesday, armed with placards some of which read:

No MoU, No Crude oil Exploration”, we are tired of suffering” and “Koluama people are suffering.”

The Chairman, Koluama Clan Oil and Gas Committee, Chief Jonathan Amabebe, who spoke on phone from Koluama on the Atlantic shores, said some of the community’s demands include, clean-up of oil spill sites in the various communities and carrying out of medical outreach to communities affected by oil spill. According to him, others are the issuance of employment letter to one of the community’s qualified indigenes, who was successful in the oil firm last employment exercise in 2015 and award of contract across the five host communities, in Koluama Clan, namely, Tamazo, Koluama 1, Koluama 2, Olobia and Kalaweiama, embedded in the MoU amongst others.

Also speaking on the development, the Technical Assistant to Special Adviser to the Governor on Oil and Gas, Prince Tare Ekubo, said that despite several warnings from the community, intervention by government, meetings and letters sent to the company, to ensure that the relationship by both parties does not degenerate, it has refused to implement decisions reached and as such the action from the community.

He however, said the state government will engage both parties to resolve the lingering issues once and for all.

Ezugworie comes with over 30 years extensive industry experience. The last 25 years was with Royal Dutch Shell in Nigeria and Overseas.
Read more
Upstream

Nigeria earned about N2 trillion from the latest round (2020/2021), as each of the awardees paid a total of N48 billion for fees and bonuses to earn the licence.
Read more
Upstream